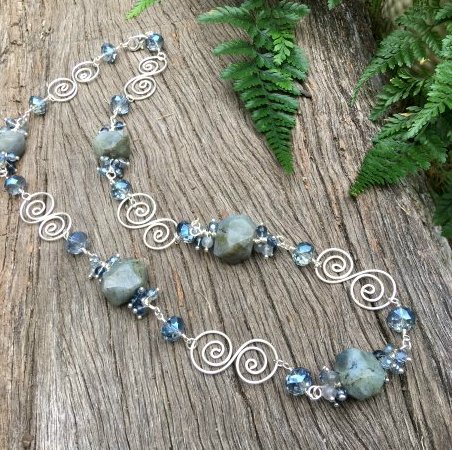 Why We Love This Tutorial:

This is a class we teach once a year or so – we absolutely love the wire swirl design. If you are local we suggest coming along to the class – the swirl design is much easier to learn in person. Plus the class is always a lot of fun! But for those that are not local, this is still a project that is quite easy (once you get the hang of the swirls!), and can be completed quite quickly. The difference with this design here today is we have added some extra dangles that we don’t normally teach in class. We’ve used some of our stunning new Labradorite faceted nuggets (definitely limited availability on these! You may need to substitute these if we no longer have them in stock), mixed with some Blue Sheen glass crystals, glass rounds and some small Labradorite rounds.

As with all of our projects, you could use any colour combination you like with this design. We have just also got in some large Sunstone nuggets, which I could see going well with white freshwater pearls and our Apricot Crystals. So many ideas, so little time!!

View all posts by admin →