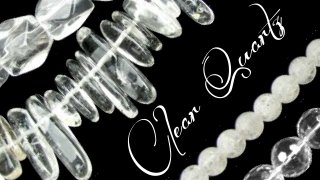 Quartz is one of the most abundant minerals on Earth, and comes in many different colours; many well known versions of which have their own names and properties (e.g. Amethyst, Rose Quartz, Citrine… the list goes on!). Pure Quartz, that is, Clear Quartz, is quartz that is devoid of the trace amounts of other minerals or inclusions that give other crystals their colour.

Clear Quartz is often also referred to as ‘Rock Crystal’ or ‘Crystal Quartz’. Clear Quartz will, however, often have other inclusions or natural fractures and areas of a more milky, cloudy nature. Generally, the clearer the Quartz, the higher the grade. Here at My Beads, our Clear Quartz round beads are usually mostly clear, while larger nuggets or shapes have more natural inclusions.

Clear Quartz has the amazing ability to absorb, store and release all forms of energy. Many regard Clear Quartz as the ultimate healing crystal, as it has the ability to amplify the powers of other crystals. Due to the effects of clearing the mind, Clear Quartz improves memory and concentration. Physically, it balances the body and stimulates the immune system.