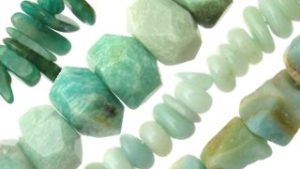 The name Amazonite comes from the Amazon River, in which deposits of a green stone similar to Amazonite were found (it is not known if they were, in fact, Amazonite!) – however the name has stuck. Amazonite is a beautiful stone that varies from light opaque blue-aqua to a vibrant aqua-green. We stock a range of different forms of Amazonite, including the somewhat rarer ‘Russian’ Amazonite (which is a darker green colour with white veins), ‘Blue’ Amazonite (which is a more uniform light blue-green colour) and ‘Multi-colour’ Amazonite (which contains a combination of blue, green, brown and yellow tones).

The soft blue-green of Amazonite is a member of the Throat Chakra, which means it is a particularly calming stone, imparting a strong sense of tranquility. For this reason, it is beneficial in times of stress or anxiety

Due to the subtle green tones often present, Amazonite is also a member of the upper Heart Chakra, which brings about loving and nurturing feelings, as well as encouraging confidence. Amazonite is a wonderful stone for relating to others and will develop a richer sense of empathy. That being said, one of Amazonite’s most useful functions is in its ability to help one develop clear boundaries. Amazonite is known as the crystal of courage and truth, which are fundamental building-blocks of setting boundaries: Amazonite will give you the courage to speak your truth and set those all-important boundaries with those around you!

In terms of the physical body, Amazonite is said to help ease digestive issues – including constipation. This is likely due to the calming nature of Amazonite, as stress is often linked with constipation. Furthermore, Amazonite works wonders for bloating and stomach discomfort.